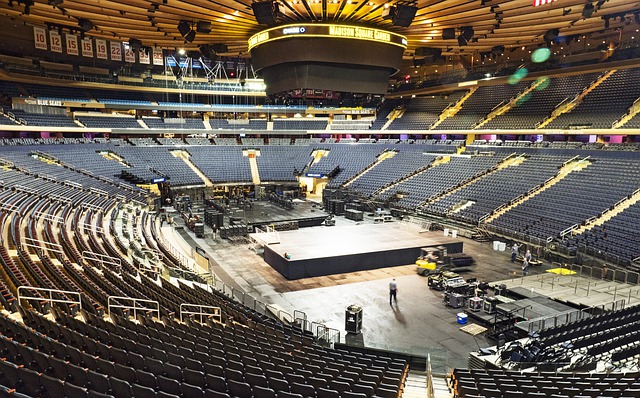 Madison Square Garden: home of the Knicks (NBA) and Rangers (NHL), are two of the most popular teams in American sports.

Anyway, even if there is no game, you don’t enter the locker rooms, you just look at the door, which is isolated by a lane, the ones you use for queues in airports and banks.

A curious thing about the Knicks locker room is how superstition is present in American sports. Even though the team plays outside of New York, they take care to cover the Rangers’ shield. They think it brings bad luck to the team if someone steps on their badge.

In addition to the dressing room, which you may or may not visit, depending on whether or not it is a game day, the tour takes you to other areas of the arena that you would probably not have access to under normal conditions. On the way to each of these games, a little bit of history of Madison Square Garden, which has already hosted mega-events of all kinds of entertainment, with games, fights, musical concerts, etc.

The corridors form a museum. They are not just photos and posters, they are relics, like the gloves autographed by Frazier and Ali, two of the greatest heavyweights in the history of boxing!

In the corridors, of course, basketball is also the highlight. More specifically, the New York Knicks. The articles are also very varied. They range from the obvious, such as T-shirts, sneakers and championship rings.

A curiosity is that the bridges cover the view that a part of the bleachers would have of the main partition, that of the first image of this post. Thus, behind each bridge, a specific score for this area of the stands. Detail: the bridge only covers the scoreboard, leaving the view of the field free to all the fans present at Madison Square Garden.

From the bleachers and bridges, it is also possible to observe banners that recall the main moments of each of the teams using Madison Square Garden. On the one hand, the number of retirees and the main achievements of the Rangers. On the other hand, the immortalized glories and numbers of the Knicks, who share the space with St. John’s (NCAA) and Liberty (WNBA).

During the tour, you will also get to know the booths and other VIP areas of the arena. All the booths are well equipped, with waiter service and neat decoration, like the pictures of the old Madison Square Garden, but they still have access to bars and restaurants.

The tour is on foot and takes about an hour and a half.

The first Madison Square Garden was opened in 1879 at the northeast corner of Madison Avenue and 26th Street. In 1871, P. T. Barnum leased the land from Cornelius Vanderbilt and rebuilt the old train station on the site into a kind of circus arena called the Hippodrome de Barnum. After the lease expired in 1879, Vanderbilt changed the name of the building to Madison Square Garden. The building quickly became very popular due to the many events that took place there.

In 1925, the second Madison Square Garden was demolished and the complex was moved to 8th Avenue on 49th Street. This building was mainly used for boxing matches.

How to visit Madison Square Garden