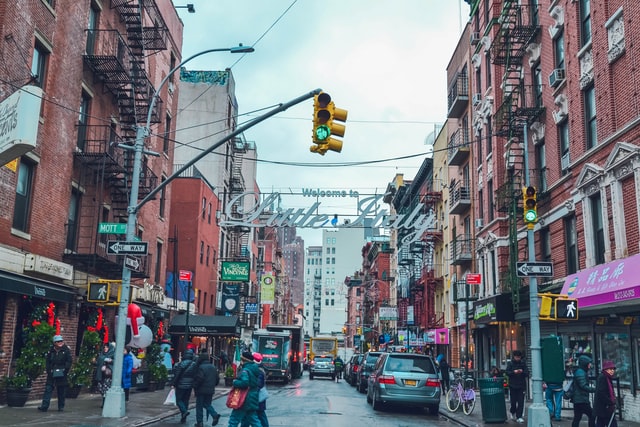 Little Italy is mainly confined to Mulberry Street, north of Canal Street. Although within a 10-block radius the buildings are still owned by former Italian residents, Little Italy experienced an exodus in the middle of the 20th century to the Cobble Hill neighborhood of Brooklyn and the suburbs of New York City. For this reason, the neighborhood has few cultural sites and most visitors come here to eat and drink.

From Mulberry Street in Elizabeth Street (where director Martin Scorsese expanded) and Lafayette Street, Little Italy is beginning to take on a more cosmopolitan feel as SoHo-style shops, cafes and restaurants invade the places that once served as clubs and shops for the Italian community. In fact, real estate agents no longer hesitate to sell the neighborhood, touting its “Montparnasse charm”, which in reality means a “hot” place with most of the apartments being expensive and in poor condition.

A few curiosities enamel the district. The former Police Headquarters, located at 240 Centre Street, are an example of the public services’ desire to allow the construction of European-style buildings, without thinking of leaving enough room for passers-by to admire them. This building is as much a landmark for its neighbours today as it was when it was completed in 1909. The stone building, built in the French Baroque style, was intended to house the headquarters of the New York Police Department in an area then known as one of the centers of criminal activity in Manhattan. Since 1988, the offices have been converted into apartments.

Other neighbourhood landmarks include the Puck Building (on Lafayette Street) and the Banca Stabile (at 189 Grand Street). The Puck Building is made of red brick and at the turn of the century housed the American comedy magazine of the same name. The building, with its two statues decorated with gold leaf depicting the corpulent Puck, now hosts many weddings and even film shoots. As for the Banca Stabile, as early as 1865 it housed an Italian bank responsible for helping Italian immigrants. In addition to banking services, the Stabile offered a variety of services ranging from translating documents to booking tickets on ocean liners.

Finally, what would an Italian quarter be without religion? Little Italy is home to New York’s oldest Catholic cathedral, 260 Mulberry Street. The Old St. Patrick’s Cathedral was built from 1809 to 1815 according to the plans of the architect Joseph Mangin, more than 40 years before the first digging of St. Patrick’s Cathedral on 5th Avenue. After the building burned down in 1868, restoration costs proved so prohibitive that the rose window was walled up and the damaged Gothic decorations covered.