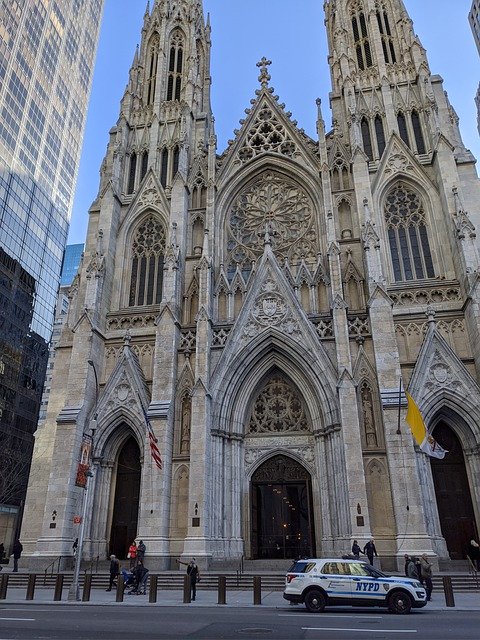 Among the shops and storefronts on 5th Avenue, the biggest attraction in New York City is St. Patrick’s Cathedral. Between 50th and 51st Streets and next to the Rockefeller Center complex, the cathedral is a historical landmark in the city.

Very charming and beautiful, the cathedral opened in 1879, was built with white marble on the walls and has two 100-meter high towers. In the neo-gothic style, it contrasts with the modern and technological buildings that surround it. Perhaps this is why it looks small on the outside, but it is very large inside, with a capacity for 2000 people. It is the seat of the Archbishop of the Roman Catholic Archdiocese of New York, and a parish church.

On March 6, 1810, Archbishop John Joseph Hughes purchased the land where St. Patrick’s Cathedral now stands for only $11,000. Initially, he wanted to build an orphanage there, as many orphans were living in New York City.

In 1813, the diocese gave the use of the property to Dom Augustin Lestrange, abbot of a community of Trappists (from the original convent of La Trappe), who came to America persecuted by the French authorities. In addition to a small monastic community, he took care of thirty-three orphans. With the fall of Napoleon that year, the Trappists returned to France in 1815 and abandoned the property. The property at this location was designated for a future cemetery. The nearby orphanage was maintained by the diocese in the late 19th century.

Bishop Dubois reopened the chapel in 1840 for Catholics employed at the asylum for the deaf and dumb and throughout the neighborhood. An intermediate church was built for the parish of St. John the Evangelist and dedicated on May 9, 1841 by the Reverend John Hughes, director of the diocese. Proceeds from the tickets sold at the dedication were used to reduce the parish’s debt, which was managed by the Lay Board of Trustees, but they did not pay off the mortgage on the property and the church eventually sold it at auction in 1844.

Construction began on August 15, 1858. Subsequently, in 1865, due to the ongoing Civil War, construction was halted for a time. The building was completed in 1878 and was officially opened by Archbishop John McCloskey on May 25, 1879.

Between the opening and today, many additions have been made to the building. In 1882, for example, a school was built and opened. In addition, the pastor’s house was built in 1884. The tall front towers were completed in 1888 and 1901.

Towers on the west elevation were added in 1888, and an east addition, including a chapel of Our Lady, designed by Charles T. Mathews, was begun in 1901. The stained glass windows in this chapel were designed and made in Chipping Campden, England, by Paul Vincent Woodroffe between 1912 and 1930.

Between 1927 and 1931, the church was completely renovated. During this renovation, a second organ was placed in the building.

The architect of the building is James Renwick. He was inspired by the cathedrals of Cologne and Amiens. The church has a total of 9838 pipes with the two organs.

Today, the church is protected as an American National Historic Monument. Take the opportunity to visit the altar and the chapel of the Virgin Mary. It is forbidden to take pictures inside the church.