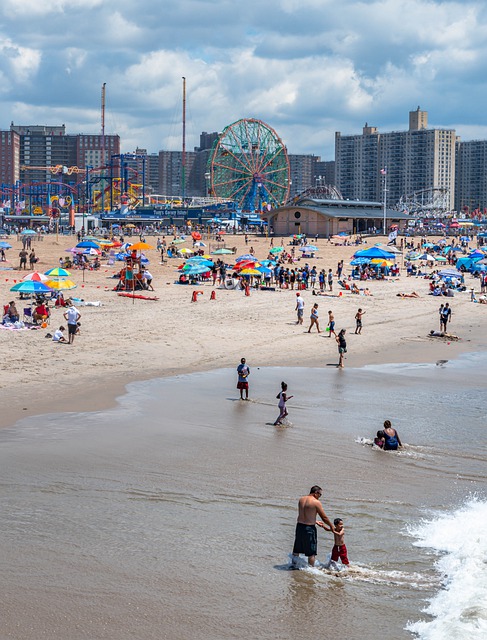 Nobody comes to New York to go to the beach. But for those New Yorkers who are short on time and want to go to the sea, the city offers a few options.

Coney Island is the most famous beach for its history, popularity and ease of access (the subway takes you directly to the beach). Coney Island is followed by Brighton Beach and then the small, intimate Manhattan Beach, all of which is spread out on a sandy peninsula that runs about 4 miles parallel to the shore.

At Coney Island, you don’t just go to the beach, you also go to the amusement park, now called Astroland, which between 1880 and World War II was the largest amusement park in the United States. The most famous train, the Cyclone, was built in 1927 entirely of wood. It still runs today, and I admit it’s not for everyone: the sound of the beams as the train picks up speed gives unexpected chills. Another attraction for those who like it quiet and high is the Wonder Wheel, a huge wheel with cabins for four people, which turns slowly and offers exceptional views. The New York Aquarium is located right next to Astroland, along the boardwalk. It is worth a visit as it is the oldest operating aquarium in the United States. It is home to sharks, penguins, seals, sea lions and a variety of fish from all over the world. The aquarium suffered significant damage during Hurricane Sandy in 2012, but the aquarium team was on site and was able to save 90% of the animals.

Every conceivable nation walks the boardwalk, Russian and Spanish are the most heard languages, English as well, and just about every language in the world, as the place attracts locals and tourists alike.

In summer it is very crowded. Stand in line for a beer, shrimp or French fries, listen to the salsa music played by a group of Dominicans or Puerto Ricans from the neighborhood. Coney Island is a sort of neighborhood beach, bordered by the ocean, the amusement park and residential blocks.

The beach hosts two unique events: the Polar Bear Run on January 1, during which large numbers of people swim in the icy ocean waters, and the Mermaid Parade at the time of the June solstice. The Mermaid Parade is the state’s largest art parade. Thousands of participants dress up as mermaids, seaweed, fish, Neptunes, fishermen and other marine elements. It’s also an opportunity to see many topless faces, because they are mermaids – normally, bras and thongs are not allowed on the beach.

By subway from Times Square.