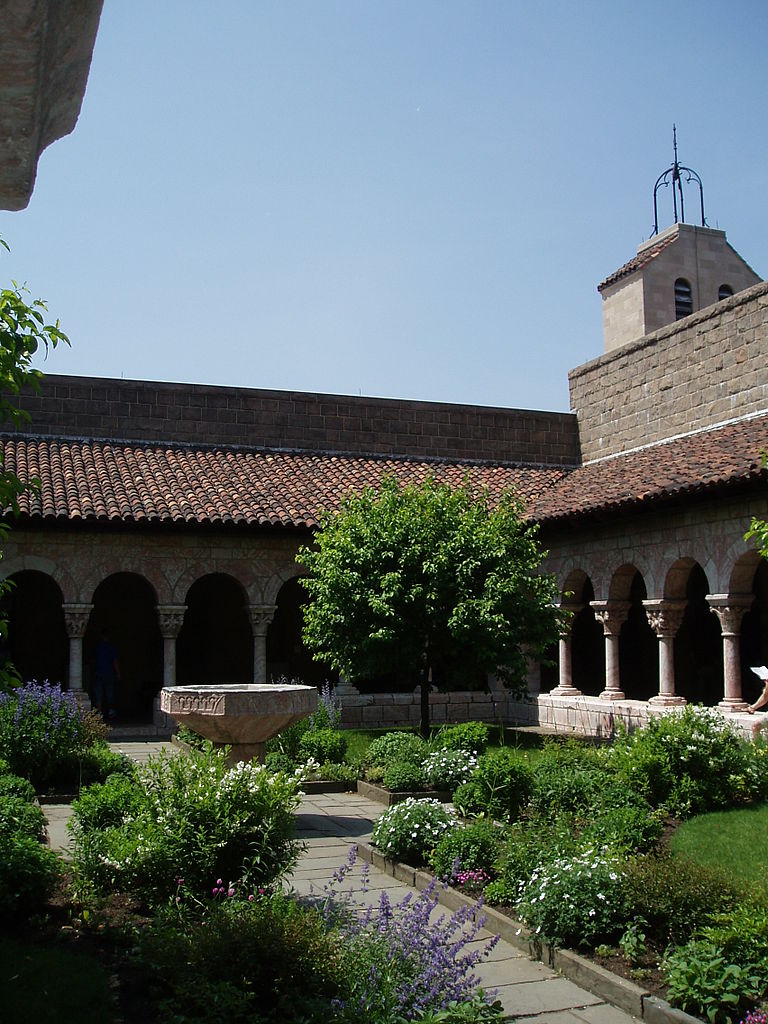 Monuments
hide
1 What to find at The Cloister?
2 History
3 Video
4 How to get to the Cloisters
4.1 Related posts:

Discover the Cloisters Museum of New York, dedicated to medieval art, linked to the Metropolitan Museum of Art and different from other museums. It is located on the north side of Manhattan Island, inside the large Fort Tryon Park, and near the Hudson River, on top of a small hill. The building was rebuilt in 1930 with architectural elements from various European medieval monasteries. It includes an exhibition of paintings and architecture from medieval Europe.

What to find at The Cloister?

The collection at New York’s majestic The Cloisters Museum was largely donated by billionaire John D. Rockefeller Jr. and includes approximately 5,000 pieces from the European medieval period from the 12th to 15th centuries, including books of hours, Dutch tapestries, illuminations, sculptures, and many other rarities from the period. For those who visit the museum, the space in which it is housed (dating back to the 1930s) seems truly out of the history books and stands in stark contrast to the rest of the New York landscape with beautiful gardens and spaces to enjoy the view of the city.

Contrary to popular belief, the current The Cloisters is neither a perfect replica nor a new design. Most visitors assume that the complex is a perfect copy of some European monastery, while others think it is a clever imitation. In reality, The Cloisters is an archaeological-architectural “patchwork”.

The Cloisters is the result of the construction of four medieval monastic cloisters (Saint-Michel-de-Cuxa, Saint-Guilhem-le-Désert, Trie-sur-Baïse, Bonnefont-en-Comminges) and three chapels were all dismantled Trie-en-Bigorre and Froville brick by brick before being transferred to New York. Between 1934 and 1938, the pieces were reassembled at Fort Tryon Park. Work began in 1935 and the official opening took place in 1938.

Fort Tyron Park, home to The Cloisters, was built by philanthropist John D. Rockefeller, Jr. in 1935 and designed by the son of Central Park’s creator, Frederick Law Olmsted, Jr. At the same time, he acquired the medieval George Grey Barnard Collection. He donated the park to the City of New York and the medieval collection to the Metropolitan Museum of Art, as well as the unicorn tapestries that he later owned and mentioned.

Between 1934 and 1938, the four European abbeys and three chapels that made up The Cloisters were transported in stone to New York City, where they were rebuilt and transformed into a single entity. The gardens, surrounded by cloisters, were planted with rare medieval flowers, shrubs and herbs with the help of expert gardeners.

The Cuxa, made of pink marble, is the largest cloister of the Cloisters and constitutes the thematic and structural center of the complex.

The Bonnefont cloister houses the medieval herb garden. From the west end of the cloister, there are spectacular views of the Hudson River, the George Washington Bridge, and across the river to the bluffs of the New Jersey Palisades.

The Trie Cloister was originally part of a French Carmelite monastery. The centerpiece is a slender fountain and the garden is planted with 80 species of plants known and cultivated in the Middle Ages.

The cloister of Saint-Guilhem was originally part of a French Benedictine monastery. It is the smallest cloister of the Cloisters.

The most famous of The Cloisters’ collections is the series of Unicorn tapestries, called The Hunt for the Unicorn. Its mystery has intrigued scholars, historians, and visitors to the Cloisters for over 500 years.

The world-renowned tapestries are on display in Gallery 17. The seven 4×3.5 meter tapestries were donated to the museum by John Rockefeller, Jr. The mysterious origins of the tapestries and the uniqueness of the stories they depict make this series of artworks unique.

The Gothic Chapel is the largest chapel in the complex, with the stained glass windows being its most impressive feature.

The chapel also contains four tombs of members of the Uregel family of Catalonia. The light that enters and refracts through the stained glass windows illuminates the majestic walls of the chapel at any time of the day.

In the center of the Fuentidueña chapel is a Romanesque sanctuary whose central element is a hanging cross and behind which is a fresco of the Virgin Mary. Due to its size and good acoustics, the chapel often hosts chamber music concerts.

The Langon Chapel, with a single nave, is the smallest chapel in the Cloister. It is originally from France.

How to get to the Cloisters

The museum is accessible by subway and bus (and of course by car). Get off the A subway at 190th street and the 1 subway at 191st street. A 10-minute walk along Margaret Corbin Drive will take you to the museum.

Take the A subway and visit The Cloisters, a branch of the Metropolitan Museum of Art in the heart of lush Fort Tryon Park, for a magical medieval journey back in time.