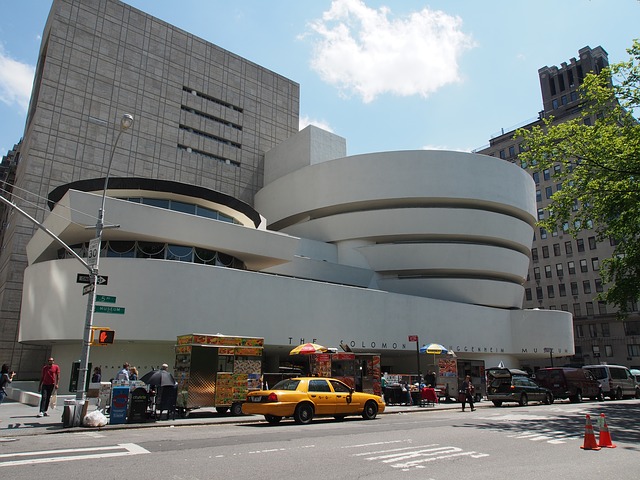 The Solomon R. Guggenheim Museum is located in Upper Manhattan. The building was designed by world-renowned architect Frank Lloyd Wright and resembles a white marshmallow with a large glass dome ceiling. It is home to a renowned collection of Impressionist, Post-Impressionist, Modern and Contemporary art on a permanent basis and also offers special exhibitions throughout the year. The Guggenheim is very popular and certainly worth a visit for anyone who loves art, freedom of thought, or a pleasant way to spend an afternoon.

Inside, the gallery’s projection consists of a gently winding spiral from the main level to the top of the building. Paintings are displayed along the walls of the spiral, but also in exhibition spaces located in flat annexes along the way.

Guided by his personal art advisor, German painter Hilla Rebay, Solomon Guggenheim began collecting works by abstract artists in 1929. Guggenheim began exhibiting his work in his apartment and, as the collection grew, he established the Solomon R. Guggenheim Foundation in 1937. Guggenheim and Rebay created the foundation to “promote, encourage and educate in the field of art and enlighten the public.”

In 1939, the Guggenheim Foundation’s first museum, the Museum of Abstract Painting, opened in a rented space at 24 East 54th Street in New York City and featured the art of modernists such as Rudolf Bauer, Hilla Rebay, Wassily Kandinsky and Mondrian Piet. During the first Guggenheim Museum, Guggenheim continued to expand its collection, acquiring works by Marc Chagall, Robert Delaunay, Fernand Léger, Amedeo Modigliani and Pablo Picasso. So in 1943, Rebay and Guggenheim wrote to Frank Lloyd Wright asking him to design a permanent structure for the collection. For Wright, it took 15 years, 700 sketches, and six working groups to create the museum. While Wright was designing the museum, Rebay was looking for sites where the museum would be built.

The museum opened on October 21, 1959 and was the second museum opened by the Solomon R. Guggenheim. Paintings on display include works by Picasso, Van Gogh and Kandinsky, among others, with an emphasis on modern art. Sculpture is also prominent and the collection is so extensive that a separate branch, the Guggenheim SoHo (located along Broadway at Prince Street) was opened in 1992.

The most popular way to see works of art at the Guggenheim is to enter the building, then take the elevator to the top. From here you can go down the spiral ramp to ground level, enjoying the works of art as you descend. Some criticize Wright’s design, arguing that it is not an ideal environment to admire art. A large space is reserved for permanent exhibitions, but throughout the year, temporary exhibitions are mounted, to the delight of passionate visitors.

Guggenheim SoHo began as a less popular product of the main museum, but experienced a constant increase in popularity in recent years. It is housed in an iconic 19th century brick structure, partially designed by Arata Isozaki. Modern art and pieces from the main permanent collection are shown at the SoHo branch, while temporary exhibitions tend to stay in the main museum. There is also a museum shop, which faces Broadway.

How to get to