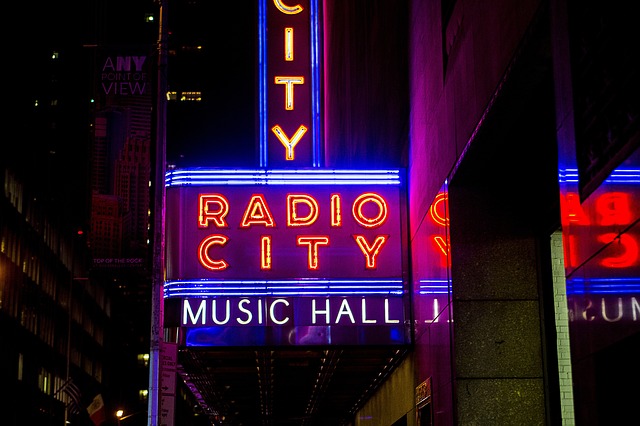 The Radio City Music Hall is New York’s most traditional concert hall. Located in the heart of Rockefeller Center, the venue hosts famous bands and artists.

Everything at Radio City is grand, from its classic façade to the theatre format that looks more like an arena.
The luxurious decor with many sculptures and monuments highlights the Art-Deco construction. The internal space for events has the capacity for up to 6000 spectators.
In all events, spectators are seated and the sections are divided in a very similar way to Broadway theatres: Orchestra (lower floor) and Mezzanine (3 levels).
The seats are comfortable, but the more distant seats make it a little difficult to see the stage because of the size of the Radio City Music Hall.

For decades, the stage was the largest and most sophisticated in the world. Some parts could be hoisted to a height of 4 meters and a depth of 8 meters thanks to a lifting system that was declared a state secret and later used in aircraft carriers.

The 75-man orchestra stood on a large cart that could be placed anywhere on the stage while the musicians played the stars in the sky.

The Radio City Music Hall offered the public great shows and the best movies. Hollywood studios covered it, as a gala premiere at the Rockefeller Center gave extra sparkle to the year’s most important productions.

Audiences patiently formed the longest line-ups New York has ever seen to get a ticket. And it wasn’t just the movies that were present: the big Christmas and Easter shows attracted thousands of New Yorkers, and many other viewers from all over the United States.

It still attracts 6 million viewers a year, twice as many as the Empire State Building, the Statue of Liberty and the United Nations Building combined.

The Christmas Spectacular has been held at Radio City Music Hall since it opened in 1932. This musical has a tradition of opening the Christmas season in New York City in early November and is scheduled to run until the end of December. The show is truly amazing with music, sets and the dance group The Rockettes. If you are traveling between November and December, be sure to put the Christmas show on your itinerary.

How to get to Radio City Music Hall