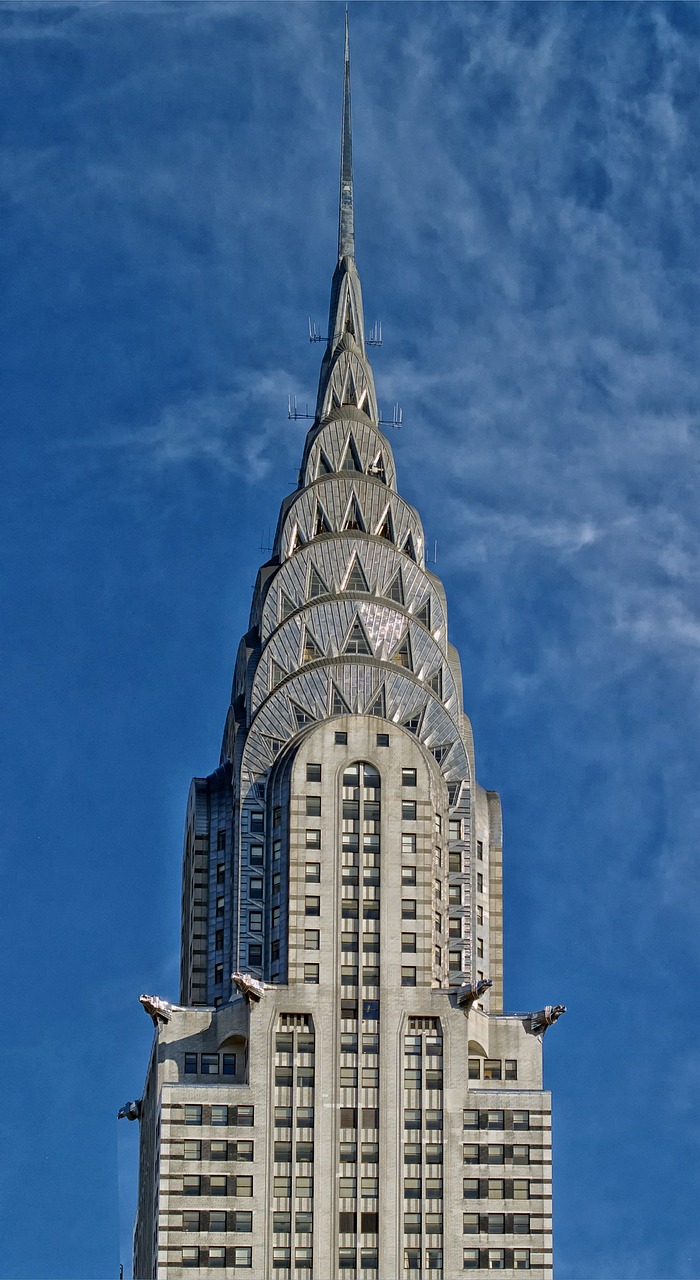 Monuments
hide
1 History
1.1 Video
2 Opening hours
3 How to get there
3.1 Related posts:

Among the hundreds of skyscrapers of all sizes and shapes in New York, it is very difficult to write that one building is more beautiful or stands out more than another, everyone agrees. Among the city’s most famous buildings, the Chrysler Building is on the list and has become one of the city’s most iconic buildings.

Inaugurated in 1931, with 319 meters high, the curiosity is that the construction was made entirely of brick and that its antenna of 56 meters can be seen from several places in the city.

The Chrysler Building was designed by architect William Van Alen for Walter P. Chrysler. When construction began on September 19, 1928, New York City was in intense competition to build the world’s tallest skyscraper. Despite this frantic pace (the building was constructed at an average rate of four stories per week), no worker died during the construction of the skyscraper. The height of the skyscraper was originally planned to be 246 meters. However, the design proved to be too advanced and costly to build by contractor William H. Reynolds, who rejected Van Alen’s original design.

Construction began on September 19, 1928. In total, nearly 400,000 nails were used and approximately 3,826,000 bricks were laid by hand to create the walls of the skyscraper. Contractors, builders and engineers were joined by other building services experts to coordinate the construction.

The Chrysler Building is considered a masterpiece of Art Deco architecture. The building’s distinctive decoration is based on elements that were later used for Chrysler cars. The corners of the 61st floor are decorated with eagles, replicas of the 1929 hood ornamentation. On the 31st floor, the decorative corners are replicas of the 1929 Chrysler refrigerator hoods. The building is constructed of masonry, with steel framing and metal siding. In total, the building currently has 3,862 front windows and 4 shafts of 8 elevators designed by Otis Elevator Corporation. The building was declared a National Historic Landmark in 1976.

The Chrysler Building is also known and recognized for its “crown”. Consisting of seven radiating plain arches, Van Alen’s crown design was a cruciform structure composed of seven concentric elements with their spines placed one behind the other. The stainless steel cladding was ribbed and ridged with several triangular dome-shaped windows that terminated in smaller sections of the seven crown arches.

Unlike other famous skyscrapers such as the Top of the Rock at Rockefeller Center and the Empire State, the Chrysler Building does not have an observatory at the top. It is not possible to board the lifts without permission, as the site is only used for offices and certain exclusive residences. That’s a pity, because the view from above must be fantastic!

But you can clearly see the Chrysler Building at the Empire State and the Top of the Rock Observatories, which provide beautiful images of the stainless steel crown that Walter Chrysler built at the former headquarters of his car company. You can enter the lobby of the building to admire the decoration, which is very similar to that of the Empire State, all restored and very beautiful.

A curiosity is that on the top floor there is a commercial room which is now rented to a dentist, who earned his nickname and became famous for being the Dentist of Heaven.

Monday to Friday from 7 am to 6 pm. Entrance to the lobby is free

Walk along 42nd Street from Bryant Park and take pictures of the Chrysler Building, hidden between New York City’s buildings, from a vantage point with breathtaking views. Near Bryant Park and the Grand Central Terminal.

By underground, get off at the station “42st Bryant Park” – Lines B, D, F and M – Color orange. Walk 400 yards towards Grand Central Terminal.