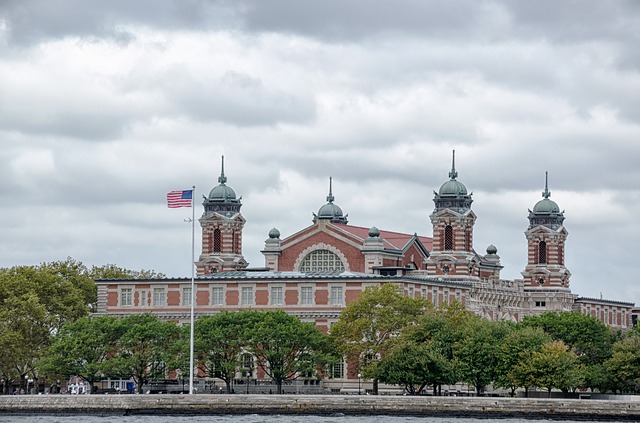 It is through this island that, until 1954, 12 million immigrants passed through, before embarking on the conquest of this New World.
Before them, 7 million people had landed, upon their arrival, at Castle Clinton, a former theatre, transformed into a reception centre, where everyone received the papers they needed. Indeed, although in almost all cases they obtained their entry visas, they knew that they could be refused, and this thought alone occupied their minds as they filled out the countless questionnaires and went through the medical examinations.
The tension was at its peak when they were about to receive the landing card, for this card, once in their hands, was the symbol of that longed-for new life. Squeezing their precious paper, they would leave laughing for the exchange office and the ferry to the new land, and… their first night in the United States.

Those who, unfortunately, had been turned away, took the central corridor to the dormitories or the hospital, before leaving from whence they came. Only about 200,000 people (out of more than 17 million) did not have the chance to immigrate to the United States.

In 1892, the old theater, which was unsuitable for this function due to the influx of immigrants, was replaced by Ellis Island, which became the main reception center until 1954. The quota laws of 1921 and 1924 marked the beginning of Ellis Island’s slow decline. In 1932, for the first time, more immigrants returned than arrived, and in 1937, the centre saw only 160 deportees and 30 detainees. During the war, Ellis Island became a place of detention for “enemies of the United States”. But at the end of the conflict, which had become too expensive for the poor services it provided, Ellis Island closed its doors for good in 1954.

With the abandonment comes decrepitude: the decorated buildings, the stored historical objects, the environment of the island were then subjected to vandalism, looters and bad weather. Once the walls were eaten away by dampness, roofs ripped open, ceilings and floors collapsed, nature took over the rooms where so many immigrants had flocked. In 1965, President Johnson’s administration was moved by this and granted Ellis Island the status of a national monument to the Statue of Liberty. By 1976, 50,000 visitors a year had gained access to the historic site. In 1982, a campaign alerted the public to the dilapidated state of the museum. Donations poured in from all over to save this heritage dear to the hearts of Americans. The site was closed in 1984 for restoration. The repair of the walls saved some of the messages engraved in plaster at the beginning of the century, moving witnesses to the frustration or hopes expressed by immigrants. The restoration of the main building at Ellis Island was the most expensive to date ($156 million) in the history of the United States. However, the museum, inaugurated on 10 September 1990, receives 2 million visitors each year.
Through photos, testimonials, and maps, the museum illustrates the diverse origins of the American people and provides an understanding of the steps and formalities that every newcomer had to go through. It is the ideal place to understand this “melting pot” that characterizes New York and the United States. 2000 broken, worn, oxidized objects found on site (kitchen utensils, children’s toys…) are on display. The open buildings allow visitors to follow the itinerary of the “arrivals”.

Today, Ellis Island is a museum… ” The Immigration Museum” where, among other things, devils, luggage, wooden, leather or wicker trunks, with yellowed labels, attest to the passage of newcomers.

The visit is free to Ellis Island and the Immigration Museum, you pay a ticket, which includes a visit to Liberty Island, Ellis Island and its museum.
https://www.statueofliberty.org/ellis-island/