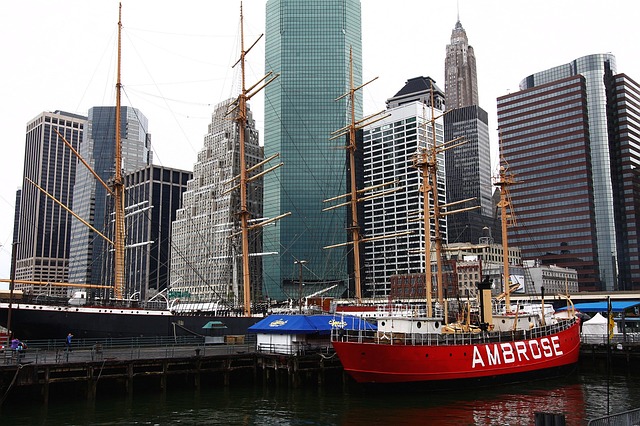 Borough
hide
1 Video
2 The Museum includes
3 How to get here
3.1 Related posts:

Made up of shops and historical sites, it receives more than 10 million visitors every year. Located on the south-eastern tip of Manhattan, it combines (according to New Yorkers themselves) the best and worst in historical conservation. It was rehabilitated from 1967 until the early 1980s.

There is no shortage of reasons to visit what was once the busiest port in the United States in the 18th and 19th centuries: restored brick buildings, cobbled streets, galleries tracing the history of ships… These buildings, steeped in history, once surrounded the former East River ferry port, which fell into disrepair after the construction of the Brooklyn Bridge, among other things.

The visitor centre is located on Schermerhorn Row, a row of brick buildings in the federal style. Dating back almost three centuries, they have gradually subsided, as can be seen from the slanted frames in the upper windows. This block of former warehouses, surrounded by Fulton Street, Front Street and South Street, is now home to a variety of shops, restaurants and pubs. The Fulton Market Building, built in 1983 in the red brick style of its older neighbours, is nothing more than a shopping centre.

Opposite Fulton Street is the Fulton Fish Market, a remodelling of an 1882 building that housed a meat and produce market. Fast-food outlets, restaurants, butchers and grocery shops now enliven the place. But the name Fulton Street is most associated with the old fish market at the end of the street at Pier 18. It was opened in 1821. At that time, fishing boats used to dock there to unload their catch. Today, most of the fish sold here are brought in refrigerated trucks. From the dawn, private individuals and restaurateurs compete for the most beautiful pieces, and their sale lasts very little time.

The South Street Seaport Museum overlooks several interesting sites in the area, including three galleries, a former printing works, a maritime crafts centre and historic ships that can be visited, such as the Ambrose. The renovated Pier 17 Dock has become a vast promenade among boats, shops and restaurants, with a view down the Brooklyn Bridge. During the summer, it is one of the busiest places in New York: bars and restaurants are crowded!

How to get here