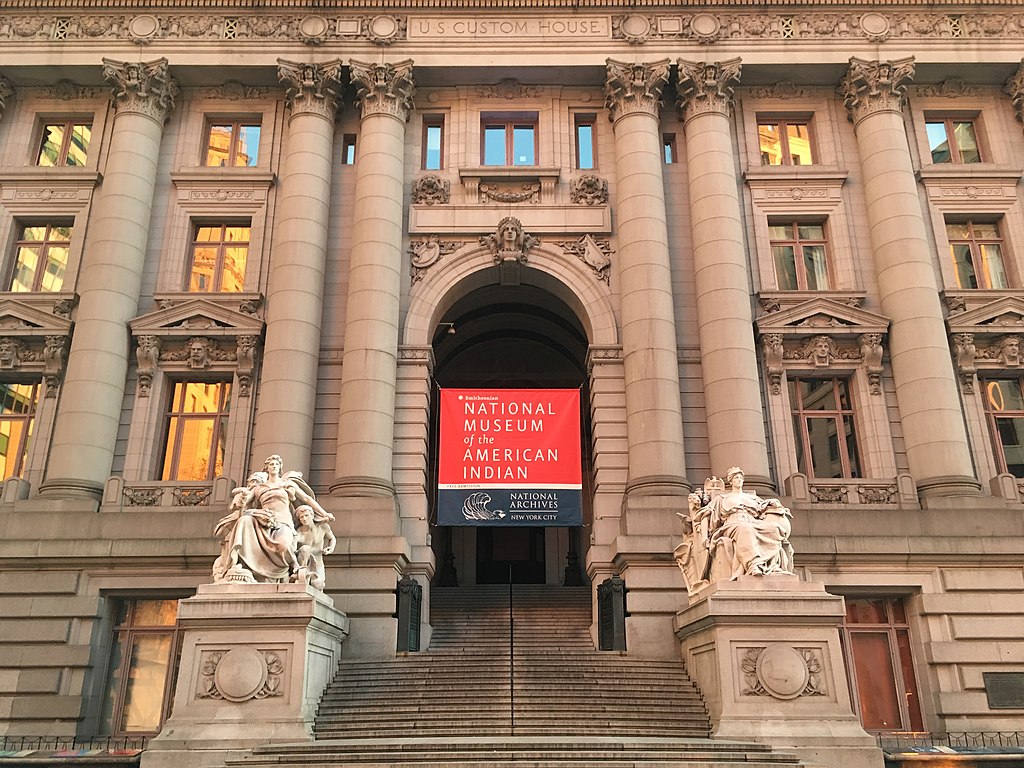 Museums
hide
1 History
2 Video
3 How to get to the museum
3.1 Related posts:

Discover the National Museum of the American Indian, a classic and historic tourist attraction. The National Museum of the American Indian was designed in the former Alexander Hamilton USA Custom House in Manhattan, near Battery Park on the south side of Bowling Green in New York City. The museum is considered one of the oldest, almost 100 years old, and one of the most important in the city for its contents and the beautiful building in which it was installed (built in the early 20th century). The museum is part of the Smithsonian Institution, which has other museums on the same theme throughout the country.

The museum is also named the George Gustav Heye Center in honor of the 20th century traveler who traveled throughout North and South America collecting artifacts from the indigenous peoples of those lands. His collection was assembled over 54 years, beginning in 1903. Heye idealized the museum and its founding years later in New York City. George Gustav Heye opened the Museum of the American Indian at Audubon Terrace in Upper Manhattan in 1922.

The museum offers many activities for the public, such as lectures, music performances, films, dance performances and tours. The space features permanent and temporary exhibits that tell the story of the American Indian.

On display are the lives and work of the original inhabitants of North America and other pre-European colonial peoples. The museum has an extensive collection of indigenous objects, covering the Western Hemisphere from upper South America to the Arctic Circle. Contemporary indigenous art is also featured in the museum’s exhibits.

An incredible tour to do in about 1 hour or 1.5 hours, free, and suitable even for children.

The museum is one of the places to visit when you are in New York because of its historic collection and the beautiful building it is housed in, which is one of New York’s architectural landmarks. You can take pictures during the tour and even visit the museum store that is located on the second floor, where you can find a variety of crafts such as jewelry, pottery, books and souvenirs to buy as a souvenir of the museum.

Metro: 4 and 5 to Bowling Green, 1 to Rector Street or South Ferry
R (and W on weekdays) to Whitehall Street, J and Z to Broad Street, 2 and 3 to Wall Street