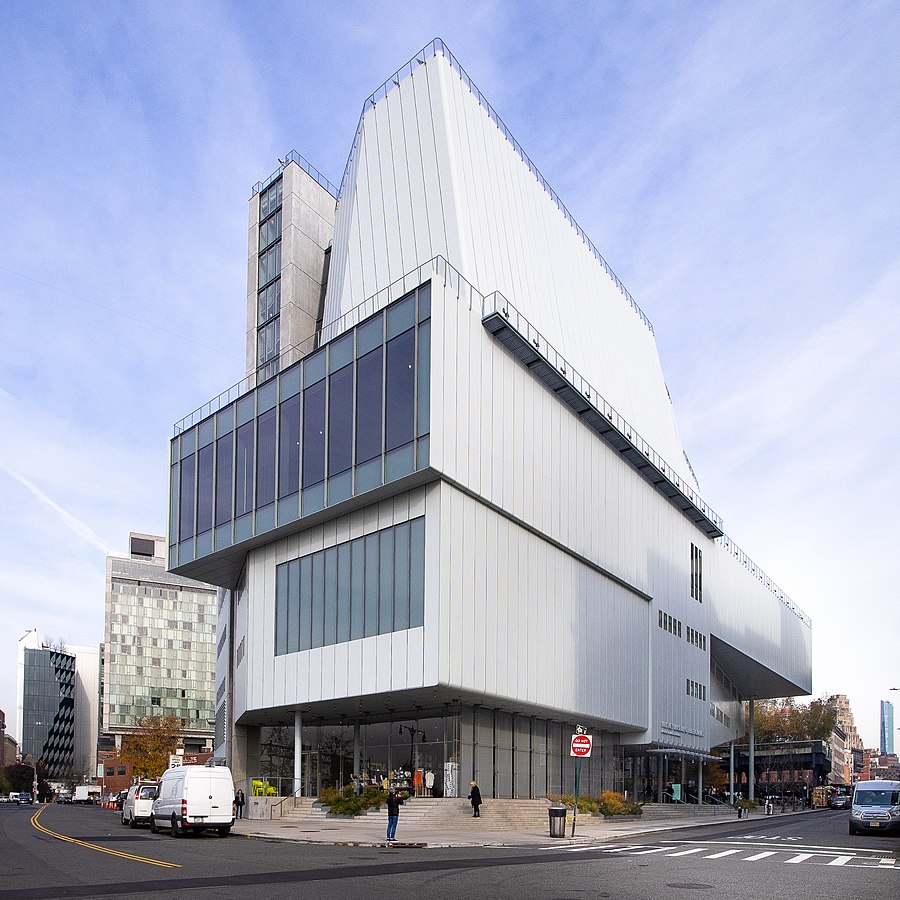 Museums
hide
1 History
1.1 Video
2 How to get to the Whitney Museum?
2.1 Related posts:

The Whitney Museum could be just one of more than 80 museums scattered throughout New York. But its facilities and exhibitions are gaining more and more traction with New Yorkers and tourists alike.

Opened in 2015, the museum is part of a plan to revitalize the Meatpacking District, which has become a major cultural and culinary hub of the Big Apple. This area of Chelsea, on the banks of the Hudson River, receives more than 5 million tourists each year and has been energized by the fame of the High Line.

This growth in tourist numbers has leveraged the Whitney Museum, which is always busy and a very cool attraction to put on the itinerary. This modern 9-story building is the work of Italian architect Renzo Piano and has large indoor and outdoor galleries.

Everyone passing through the area is impressed by the predominance of white buildings, a real contrast to the old abandoned sheds in the area and increasingly rare.
The main feature of the art gallery is to provide a space for exhibitions of 20th and 21st century American artists, who often would not have a place elsewhere.

The permanent collection includes more than 21,000 works by 3,000 artists from the United States, a tradition that has continued since the old Whitney Museum opened in 1931.
The artists are not well known to the general public and many are not recognized by world critics, but the exhibitions are always very interesting and with current themes, which helps in understanding the works.

Gertrude Vanderbilt Whitney, founder of the museum, was herself a sculptor and art collector. As a patron of the arts, she had already succeeded in establishing the “Whitney Studio Club,” a New York exhibition space she created in 1918 to promote the work of avant-garde and overlooked American artists. With the help of her assistant, Juliana Force, Whitney had amassed some 700 works of American art, which she offered to donate to the Metropolitan Museum of Art in 1929, but the museum refused. This, coupled with an apparent preference for European modernism at the newly established Museum of Modern Art, led Whitney to create her own museum devoted exclusively to American art in 1929. In 1931, architect Noel L. Miller converted three row houses on West 8th Street in Greenwich Village – one of which housed the “Studio Club” – into the museum’s home, as well as the Whitney’s.

In 1954, the museum moved from its original location to a small building behind the Museum of Modern Art. The Whitney moved in 1966 to the southeast corner of Madison Avenue and 75th Street on the Upper East Side of Manhattan. The current building, designed and built from 1963 to 1966 by Marcel Breuer and Hamilton P. Smith in a distinctive modern style, was easily distinguishable from the neighboring single-family homes, with its granite staircase on the facade and inverted exterior windows.

The new Renzo Piano-designed headquarters in Lower Manhattan’s Meatpacking neighborhood. The new Gansevoort Street Museum marks the southern entrance to High Line Park. Construction began in 2010 and was completed in 2015.

The Whitney Museum is very spacious inside and its white walls contrast with the contemporary exhibits, which are often colorful and full of compositions. Another highlight of the Whitney Museum is its terrace, where it also has a restaurant open to visitors. The space was created for everyone to enjoy the incredible view of Chelsea and its surroundings and has become one of the great attractions of the place.
From the platform, it is possible to see the Empire State, One World, the Statue of Liberty, The High Line and take advantage of the fact that the buildings in the Meatpacking District are lower than those in other parts of New York to make great photos.

The rooftop is one of the most visited places by tourists, much more so until the exhibitions, as the view is very different from the city’s observatories and is an integral part of the museum’s activities at no extra cost.

How to get to the Whitney Museum?

The Whitney Museum offers free tours every day of the week with expert guides who explain the exhibits and works. There is no need to make a reservation, just have the ticket and ask a staff member about the tour. On the official website you can check dates and times.