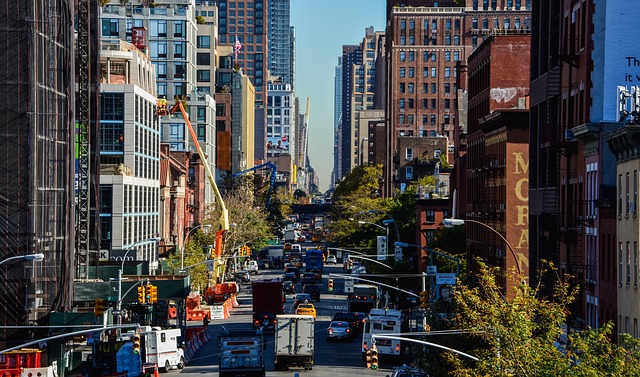 Tribeca (or TriBeCa) is a neighborhood in Lower Manhattan, New York City. Its name is an acronym based on the words “Triangle Below Canal Street”, and is bounded by Canal Street, West Street, Broadway, and Chambers Street.

The area was one of the first residential neighborhoods to develop in New York City beyond the city limits in the colonial era, with residential development beginning in the late 18th century. By the mid-19th century, the neighborhood had become a commercial center, with a large number of stores and lofts built along Broadway in the 1850s and 1860s.

The development of the neighborhood was spurred by the extension of the IRT’s Broadway – Seventh Avenue line, which opened to the public in 1918, the concurrent extension of Seventh Avenue, and the widening of Varick Street during the construction of the subway in 1914. This improved access to the area for both vehicles and passengers using public transportation. The neighborhood was also served by the IRT Ninth Avenue Line, an elevated train line on Greenwich Street that was demolished in 1940.

By 1960, Tribeca’s industrial area had disappeared. The prevalence of vacant commercial space attracted many artists to the neighborhood in the 1970s. Since 1980, large-scale redevelopment of the neighborhood has transformed Tribeca into a beautiful residential neighborhood.

In 1996, the Tribeca Open Artist Studio Tour was established as a non-profit arts organization whose mission is to empower Tribeca’s artists while providing an educational opportunity for citizens. For the past 15 years, the free annual tour of Tribeca’s artist studios has provided people with a unique glimpse into the lives of creative people. Tribeca suffered financially after the terrorist attacks of September 11, 2001, but government grants and incentives helped the area recover fairly quickly. The Tribeca Film Festival was created to contribute to the long-term recovery of Mahattan after 9/11. The mission of the Tribeca Film Festival is to enable the international film community and the general public to discover the power of film through a festival experience. Tribeca is a popular location for film and television.

Today, Tribeca is one of the most fashionable and sought-after neighborhoods in America and is known for its famous residents. In 2006, Forbes magazine ranked the 10013 zip code as the most expensive zip code in New York City.

In the early 1970s, two years after SoHo’s artist status was legalized, organizations of artists and residents of the South Side, then known as Washington Market or simply the Lower West Side, sought similarly designated areas for their neighborhood.

Tribeca is dominated by old industrial buildings that have been converted into residences and lofts, like those in the nearby historic SoHo Cast Iron neighborhood. In the 19th and early 20th centuries, the neighborhood was a center of the textile and cotton trade.

Notable buildings in the neighborhood include the Textile Building, a historic Renaissance Revival building built in 1901 and designed by Henry J. Hardenbergh, the Powel Building, designated as a Hudson Street Historic Landmark, designed by Carrère and Hastings and built in 1892. At 73 Worth Street is a fine row of white Renaissance Revival buildings built at the end of the Civil War in 1865. Other notable buildings include the New York Telephone Company building at 140 West Street, with its Mayan-inspired Art Deco style, and the former New York Mercantile Exchange at 6 Harrison Street.