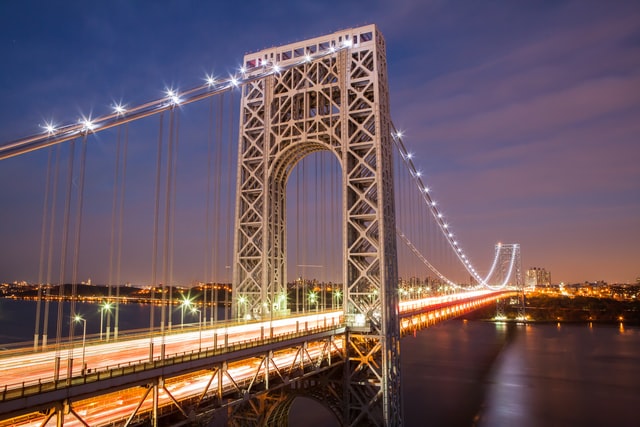 The bridge has an upper level with four lanes in each direction and a lower level with three lanes in each direction, for a total of 14 traffic lanes. The speed limit on the bridge is 70 mph, although traffic congestion often slows traffic, especially during morning and evening rush hours. A pedestrian and bicycle path is located on each side of the upper level of the bridge. In 2007, the George Washington Bridge had the highest traffic capacity of any bridge in the world, with approximately 106 million vehicles per year, making it the busiest bridge in the world for vehicles.

Construction of the new bridge began in October 1927 as a PANYNJ project. The chief engineer for the project was Othmar Ammann, with Cass Gilbert as architect. The bridge was completed on October 24, 1931 and opened to traffic the next day. The bridge was originally called the Hudson River Bridge, but was later named after George Washington, the first president of the United States. The bridge is near the sites of Fort Washington (on the New York side) and Fort Lee (on the New Jersey side), which were fortification sites used by General Washington and his American forces in his unsuccessful attempt to prevent the British occupation of New York in 1776 during the American Revolutionary War. Washington evacuated Manhattan by crossing the passage between the two forts. In 1910, the Daughters of the American Revolution erected a stone monument to the Battle of Fort Washington. The monument is located about 91 yards northeast of Little Red Lighthouse on the hill east of the bridge.

When the bridge opened in 1931, eight months ahead of schedule, it surpassed the Ambassador Bridge as the longest main span in the world. At 1,100 meters, it nearly doubled the previous record of 560 meters. It held this title until the opening of the Golden Gate Bridge. The total length of the bridge is 1,450 meters (1,450 feet). The bridge cost $59 million and 12 lives.

The original construction had six lanes of traffic, but in 1946, two additional lanes were built where the upper level is now. A second lower level, provided for in Ammann’s original plans, was commissioned by Colonel McCammon, USACE, and opened to the public on August 29, 1962. This lower level was nicknamed “Martha” (wife of George Washington). The additional deck increased the capacity of the bridge by 75%, making the George Washington Bridge the only suspension bridge in the world to have 14 lanes of traffic, eight lanes on the upper level and six on the lower level.

The Manhattan Bridge is a suspension bridge over the East River, connecting lower Manhattan (Canal Street) to Brooklyn (Flatbush Avenue). It is the last suspension bridge to be built on the lower East River (the Brooklyn Bridge and the Williamsburg Bridge were built nearby). Maximum span of the bridge: 448 m, length of the suspension cables: 983 m. Total length: 2089 m

Completed on December 31, 1909, the bridge was designed by Leon Moisseiff, who went on to design the infamous Tacoma Narrows Bridge, which collapsed in a windstorm in 1940. However, the Manhattan Bridge was built using a different technology, using for the first time the “deflection theory” of Austrian engineer Josef Melan, which was already being applied to suspension bridges of the time. According to this new theory, the stability of long suspension bridges could be achieved by constructing the bridge deck itself as a load-bearing element, balanced by the span girder. The upper deck of the bridge has a four-lane roadway. The lower level has three lanes, plus four underground railroad tracks, a pedestrian walkway, and a bike path. The original pedestrian walkway was closed for a long time and was reopened a few years ago. When the bridge was opened, the tracks were not yet connected to the city’s subway lines, but were used by separate streetcar lines. In the years that followed, the bridge’s track system underwent many modifications as city traffic and, of course, the subway lines changed and evolved. The tracks were also used for rail transportation. In 1956, a major renovation was carried out because the different weights of the different trains had weakened the structure of the bridge. Today, the use of the bridge for rail traffic is still the subject of much controversy between the different controlling and operating authorities, and some of the tracks are closed at times.

New York City’s Broadway Bridge crosses the Harlem River between Inwood and Marble Hill, two parts of Manhattan (the latter is on the mainland and attached to the Bronx due to the Harlem River detour).

It is so named because it extends Broadway Avenue, which is designated as part of US 9 at this point. The bridge also allows the IRT Broadway – Seventh Avenue Line to pass over the roadway. Just north of the bridge, along this line, is the Marble Hill – 225th Street station.

Before the Harlem River was diverted, the area bridge was called Kings Bridge and crossed the river at the border between the boroughs of Marble Hill and the Bronx. The Boston Post Road and the Albany Post Road crossed the bridge. A later bridge, opened on January 1, 1895, crossed the canal.

The bridge opened to traffic on January 15, 1963, the same day the Cross-Bronx Expressway was completed. In 2008, the New York City Department of Transportation, which operates and maintains the bridge, reported an average daily traffic volume in both directions of 189,598 vehicles.

Construction of the Alexander Hamilton Bridge began in the early 1960s. In the spring of 1962, the two parallel spans that made up the main span were connected over the Harlem River. The new bridge opened to traffic on January 15, 1963, the same day that the Cross-Bronx Expressway was completed. However, the interchange between the bridge and the Major Deegan Expressway was not opened until 1964. Ernest Clark, who designed the Cross-Bronx Expressway under Moses’ direction, described the interchange as “concrete macaroni.”

The Williamsburg Bridge is a New York City suspension bridge that spans the East River and connects the Lower East Side of Manhattan on Delancey Street to the Williamsburg neighborhood of Brooklyn on Broadway near the Brooklyn-Queens Expressway (Interstate 278).

Construction of the bridge, the second to cross the East River, began in 1896, with Leffert L. Buck as chief engineer, Henry Hornbostel as architect, and Holton D. Robinson as assistant engineer, and was dedicated on December 19, 1903 at a cost of $24,200,000. During its construction, the Williamsburg Bridge held the record for the longest suspension bridge in the world. This record was lost in 1924 when the Bear Mountain Bridge was completed.

The Williamsburg Bridge was opened on December 19, 1903 to horse-drawn carriages, bicycles, and pedestrians. However, due to complications between the Greater New York and Privately Owned Railway companies, elevated trains did not operate over the bridge until 1908. The final cost of the bridge and its entrances was $24.2 million, three times the original estimate.

The Willis Avenue Bridge is a floating bridge that carries northbound vehicular traffic (as well as bicycles and pedestrians) over the Harlem River between the boroughs of Manhattan and the Bronx. It connects First Avenue in Manhattan to Willis Avenue in the Bronx.

In the late 19th century, massive industrial development in the Bronx prompted officials to find ways to transport northern Manhattan residents to new jobs. While the Third Avenue Bridge stood about a half-mile north along the Harlem River, that bridge, rebuilt in 1890, had already reached the limits of its capacity.

In July 1894, the Commissioner of Public Works was authorized by the City of New York to construct a bridge that would run from First Avenue north of Manhattan across the Harlem River to Willis Avenue in the Bronx. The site chosen for the Harlem River crossing was a place where ships had been crossing since 1667.

The new Willis Avenue Bridge was completed and opened to traffic on October 2, 2010. Although the $612 million cost was more than double the original estimate, the new bridge was completed ahead of its scheduled completion date in 2012. Like the old bridge, the new Willis Avenue Bridge has four lanes. After the new bridge opened, the old parts were transported to Bayonne, New Jersey, for recycling.

Known as the Triborough Bridge until 2008, the Robert F. Kennedy Bridge is not just a bridge, but rather a complex consisting of three long-span bridges, a series of smaller bridges and viaducts, more than fourteen miles of access roads, parks and recreational facilities.

To appreciate the scope of the project, one need only view it from above. Plans to connect Manhattan, Queens and the Bronx were first announced by Edward A. Byrne, chief engineer of the New York City Department of Facilities and Structures, in 1916. Although its construction had long been recommended by senior local officials, the Triborough Bridge did not receive any funding until 1925, when the city needed funds for studies, borings, and structural projects.

On October 25, 1929, Mayor Jimmy Walker laid the cornerstone for the Triborough Bridge. This date proved to be significant later, as it was just one day after “Black Thursday” which brought on the Great Depression. The $4 million originally allocated by New York for the construction of the new bridge – most of which was spent on bribes and lawyers’ fees – had already been spent before the Ward Island docks were built.

The Triborough Bridge opened on July 11, 1936, at a cost of $60,300,000. The newly formed Triborough Bridge Authority, whose administrative offices were on Randall’s Island, financed $35 million of the construction costs. This money would be “paid back” by the 25-cent toll, with the state, county and city funding the remaining costs. More than 15,000 guests attended the ceremony, including President Franklin Roosevelt, Mayor LaGuardia and Commissioner Moses.