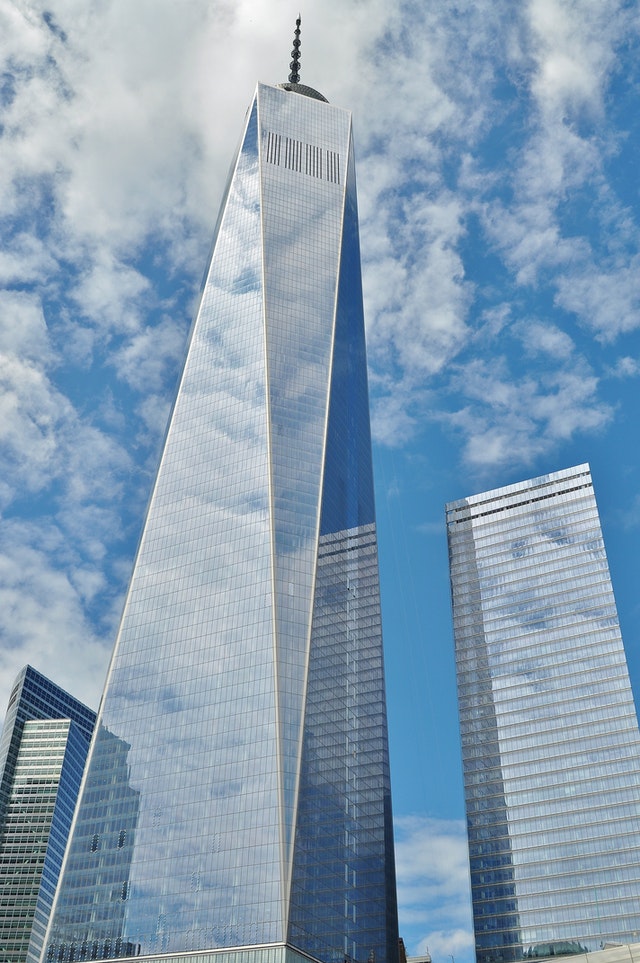 Monuments
hide
1 Start of the attraction
1.1 Video
2 The Main Observatory
3 Opening :
4 How to get to One World Observatory
4.1 Related posts:

Is one of New York’s most popular attractions and is of particular importance to the city. At 541 meters high, it is the 4th tallest building in the world and is located in Lower Manhattan, the financial centre of New York. After the fall of the Twin Towers, the terrorist attack on the World Trade Center left a doubt as to what would be built there and a void to fill. Until the inauguration on 03 November 2014 of the “One World Trade Center”, which completed the construction of the complex in the former WTC, where the “National September 11 Memorial & Museum”, other commercial buildings around it and the World Trade Center train station are still located.

The entrance to the One World Trade Center building is easily accessible and is located at the corner of West and Vesey St. The building is so impressive that it can be seen from many places in Manhattan. Just look up to find the tallest building in New York City. And it is not only the height that is the highlight of One World, but also every detail of the technological construction. It takes between 1.5 and 2 hours to complete the tour.

Start of the attraction

The attraction is very different because it is very modern, very different from the other observatories in New York, which are much older. After entering the building, you have a reception called “Global Welcome Center”. The space has a giant screen that counts the number of visitors who have passed through the place and their respective countries of origin. The registration data is presented on the map in real time.

Just after the “Global Welcome Center”, there is another area that tells a little bit about the history of the construction of the “One World Trade Center”. There are hundreds of screens positioned with video testimonies of engineers, workers, who helped in the construction.

This space is not as interesting as the others, but since it is inside, take advantage of it to discover a little more about how the project was conceived, from the highlighting on the walls all along the row to the simulation of the rocks of the construction and the foundation of the building.

Sky Pod is the name of the lift in the “One World Trade Center”. It is not just a lift, the Sky Pod is an attraction in its own right. It is five lifts that go from the ground floor to the 102nd floor in only 60 seconds. You take 500 metres up the lift in one minute.

The entire route is interactive with three walls of high quality screens showing an incredible film of the rise of New York’s buildings over the last few centuries and the formation of their famous “skyline”. The film reminds us of the city when it was still just trees and farms. It’s like a time tunnel!

The cool thing is that on the screens you can follow the year the film was shown, the number of metres travelled by the lift and the part of the building you are in at the moment, until you reach the 102nd floor. All this in 60 seconds!

When you exit the lift on the 102nd floor, the One World Observatory experience begins. All visitors are directed to a small room with more screens with a short video about New York and the fast-paced pace of the city. An interesting film, which has a big surprise in store at the end.

This floor is not yet the main observatory.

Going down the stairs to the 101st floor, you will find 3 restaurants that offer an incredible New York experience and look.
The restaurants are :

After all the small attractions, take another flight of stairs down to the 100th floor and get ready for the observatory floor. One World’s 360-degree bridge allows you to see different points of Manhattan, the Statue of Liberty, New Jersey, from a different perspective, as we are always used to seeing pictures and observing the city from Midtown (centre) and not from the south of the island.

The difference between this observatory and the Empire State and Top of the Rock, apart from the location, is that it is totally enclosed, inside one floor of the building and with glass, which helps a lot when it is in the freezing cold of winter.

Still on the 100th floor, it has a glass floor that allows you to see the movement of the street and cars in real time. In fact, screens are placed on the floor, which transmit live from cameras placed outside the building, all so real that it looks like a real glass floor.

On the same floor is another interactive attraction called City Pulse. It is a presentation, made by specialised guides, on something from New York history, accompanied by screens in a circle and sensitive to movement.

How to get to One World Observatory

Line: Fulton station
Get off at the Fulton Street/Broadway-Nassau station.
Get off Fulton Street and follow Church Street.

Line: Park Station
Get off at Park Place station. Exit at Church Street.

Line: World Station
Get off at the World Trade Center Station. Exit at Church Street.