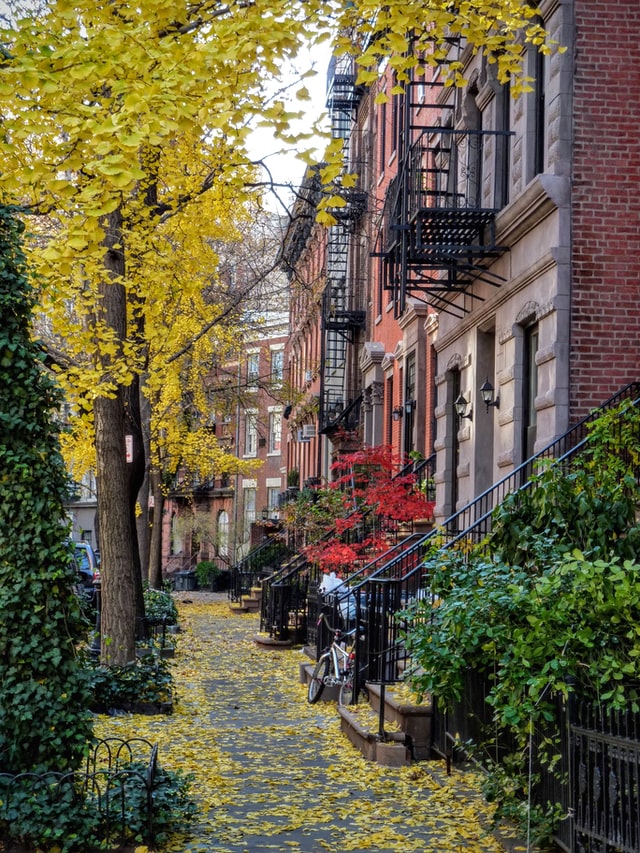 Densely populated neighborhood located on the west side of Lower Manhattan in New York City, is often referred to simply as “the Village”. The vast majority of the area is made up of upper and middle class families. Greenwich Village is generally known as an important landmark on the map of American bohemian culture. The neighborhood is known for the diversity of its artistic residents and the alternative culture they propagate. Due in part to the progressive attitudes of many of its residents, the village has always been a focal point for new movements and ideas, whether political, artistic or cultural. This tradition as an enclave of avant-garde and alternative culture was established in the early 20th century, with the development of small presses, art galleries and experimental theaters.

The legends are often much more interesting and romantic than the reality. The urban legend of the twin houses on Commerce Street, one of the most atmospheric streets in Greenwich Village, is a good example.

You don’t have to spend much time in the village to hear someone tell the story of the two houses. Legend has it that 39 Commerce Street and its twin 41 Commerce Street were built by a widowed sailor for his two daughters. The siblings fought constantly until one day their father heard their bickering and decided that the girls should live in separate houses. He had the twin houses built, making sure that the common garden between the houses was separated from the outside world by a high wall. This was the only place where the girls could meet. The captain also made sure that the windows were all at the front of the house, so that the girls who were fighting would not have to see each other.

The father hoped that the pretty little houses and the shared flower garden would bring the girls together.

It’s a nice story, but the truth is that it was the imagination of the townspeople that brought it to life. Commerce Street is indeed one of the most charming streets in the village, and these two houses are an interesting addition to your tourist itinerary.

The story of the sea captain and the bickering brothers is just a legend. The truth is that the twin houses were built by a New Jersey milkman named Peter Huyler. In those years (1832), the village was growing at a rapid pace. Many businesses and banks were moving out of Lower Manhattan, where there was a cholera and yellow fever epidemic.

This savvy milkman made a good income from houses rented by the village’s middle-class residents. He built 4 to 4 apartments in each house and later added windows to the side walls. The gardens were used to grow vegetables rather than flowers and to raise chickens.

In 1948, number 41 was privately owned, its apartments were consolidated and turned into a “townhouse”. Number 39 is still shared by 4 families.

Most of Greenwich Village’s neighborhoods are made up of mid-rise buildings, 19th century apartments, and townhouses, which contrast with the tall building landscape of Midtown and Downtown Manhattan. Historic Washington Square Park is the center and heart of the neighborhood, but there are many other smaller parks in the village, including Father Fagan, Minetta Triangle, Petrosino Square, Little Red Square and Time Landscape.

Every year on October 31, the village hosts the New York City Halloween Parade, the largest Halloween event in the country, attended by approximately two million people from all over the region.